A Tweet a Day – a response from the ground up 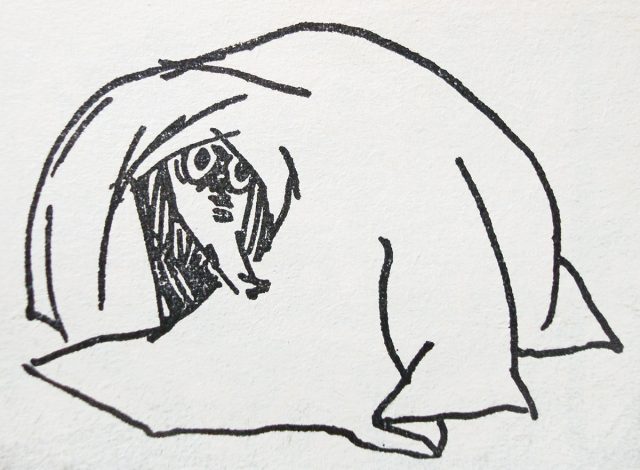 Drawing of the Fillyjonk by Tove Jannson

A retelling of a child’s short story through the microblogging service twitter, A Tweet a Day emphasises the distribution and delocation of experience. The story is Tove Jannson’s The Fillyjonk who Believed in Disasters, from her 1962 Tales from Moominvalley. One word is posted every day through the artist’s stream, which is received by (at the time of writing) 166 people though twitter’s website, an RSS feed, or programmes like TweetDeck or Twitterrific. The word might be “home” or “a” or “fillyjonk”. The tweets are posted every day at or around 3.00pm in the UK, which is ‘story time’ for British schoolchildren. 1

Ford began using the website Twitter in April 2009 as a way to keep people informed of his art practice and development. But making work is not always quick and he began to fear losing his followers due to lack of updates. The pressure to frequently post interesting tweets became a constant worry.

After re-reading one of his favourite series of books from childhood, Ford found there was sub-text about escaping neuroticism in one of the tales. The irrational fear felt by the main character resonated with Ford’s tweet anxiety so he decided to recite the tale via his Twitter profile, thus also easing his own status update neurosis. 2

Accessing Ford’s stream requires a computer, cables or wifi setup, a modem (the small size of tweets in mere bytes allows for dial-up), a telecommunications infrastructure, which allows communication with an internet service provider, and a giant undersea cable linking New Zealand to twitter’s servers in the US, for starters. (The process can also be done with a cellphone and its related cell towers and telecommunications company, along with the computer and associated materials to set it up.)

This work, physically far larger than the confines of the gallery, was nonetheless exhibited as part of Ford’s solo show Too Orangey for Crows (named after a British ad campaign for a soft drink called Kia-Ora)3. The address to follow Ford was provided in all the press materials, including the fliers and Enjoy’s regular email-out, making A Tweet a Day the first work seen by a lot of the show’s audience, particularly regular visitors.

This work intrudes upon you. Although you have to initially participate (be on twitter, learn about the work, add @JamesRFord to your feed), from that point it is integrated into a regular part of your life: if you want to receive your other tweets, you have to keep interacting with the work. It has a staccato persistence that acts to remind you of the earlier parts, but with a sufficient gap between words to destroy any chance of following the narrative. Ultimately the work even becomes normalised, and it stops being unusual to see a single, decontextualised word. Accessing the feed through the website and reading up from the bottom can allow you a sentence or two, which can be enough to get some of the flavour of the story. The persistence is also a comment on the transitory nature of Internet technology and trends, as the odds are low that twitter will survive until the end of the story in 2021.

Ford’s piece gains a lot by being surrounded by other tweets, those that use twitter for its ostensible purpose and fill up the 140-character limit. Again, the repetition is important, because unlike those either side, Ford’s tweets are linked through each engagement. The work is continuity in the face of disruption, and signal in the face of noise. This manages to cause a disruption of its own, breaking the flow of contained, (generally) meaningful statements by pointing out their isolation. Ironically, Ford’s tweets are isolated in their own way, visually boxed off by the amount of white space around them. User interfaces are created with certain expectations in mind, and most twitter interfaces expect a minimum of activity within each tweet. By not even filling a single line, A Tweet a Day again distinguishes itself from its environment.

James’ work had no singular physical presence, repeatedly existing on several networks (websites, home computers, servers, and so on) that it shares with others. There may seem to be no place on which to hang analysis: but that lack is the means to analyse it. This object’s decentralised physicality has several flow-on effects that make the work more complex and express well the interreliance of its material and immaterial parts. It appears at first glance that this is an object without a physical presence, and certainly it does not have a contingent singular mass of substance to call its own. Instead of getting worried about its physicality, it would be better to consider that its material quality is to be distributed.

This quality is not especially new, as mass reproducibility has been with us for a long time now, and sidestepping Walter Benjamin and auras, mechanical (and digital) reproduction has been integrated into artistic practice since at least Pop Art. Duplication is expected and required to make many objects (and many artworks) what they are, and it plays an important role in these objects’ accessibility. A Tweet a Day relies on the large-scale reproduction of its physical components, such as home computers and smartphones, modems, and servers, as well as the vast existing network of wires, transmitters, and receivers. Each computer is substantially like the others, as is each modem, each wire. That there are already hundreds, thousands, millions of these, functioning in the same ways, means the conditions exist for the artwork to occur.

Once it occurs, the infrastructure – the physical stuff of the object – allows for a kind of accessibility similar to telegraph or tv, but far greater in degree. That the @JamesRFord feed (at this time) has only several dozen followers is not particularly relevant in this case. As every posted tweet is accessed, it is reproduced in unique circumstances many times over, and the theoretical maximum of these permutations is in the billions, at least. Duplication leads to accessibility, which leads to further duplication; only now it has become variation. The physical borders of the object have already been dispersed, and now the ontological borders are looking hazy. Is the object still A Tweet a Day in every case? Whether it is surrounded by tweets from Ford himself, random celebrities, or friends talking about their lunch? I think it is, for two reasons. Firstly, duplication and variation are not things that have happened to the object, they are the objects (plural), or at least substantial parts thereof. Secondly, the process by which the tweet’s ontological state is dispersed is really just a technologically inscribed version of the experience of subjective access.

In my feed, a tweet stating “faster…” is bordered on either side by a cartoonist asking for courtesy at conventions and a librarian/forum moderator annoyed by a glitch in Google Maps. It is probably the only feed out of all twitter subscribers for which this situation is true. This can be seen as a sort of codification, intrinsic to the programming, of the different ways participants experience an event. Visitor studies recognise the fact that no two viewers will have the same interaction with an object or piece of interpretation, and twitter brings this to the surface. The experiential differences are a major point of the system, in a way that is not seen in other broadcast media. Although much is still out of their control, the viewer’s choices have an obvious impact on what they ultimately engage with.

With this in mind, I think about the idea of control, and who has it, and why. This is obviously an enormous topic, but there is one major point I want to focus on: viewer (or participant) control is not the seizure of authorial (or curatorial) control. With the idea that the technology is codified subjectivity, I am suggesting that the exercise of control is functional and repeatable, and that it does not diminish prior interactions in a political way.4 The reliable nature of duplication and variation, that it will keep happening, and that it will always be different, lessens the impact of any given iteration on all the others. However, it retains its value for the participants who have had input, exercised control, in that iteration. In short, even though experience, affective or otherwise, is subjective, its value is not diminished by the existence of other subjective experiences.5 What appears to be the uncontrollability of internet-based media is, as with the already mentioned qualities, better understood as the dispersal of control.

The viewer’s control in this case has to do with A Tweet a Day’s repetitiveness, which has the effect of establishing itself within ‘regular life’. Subscription means the daily updates find their way into the participant’s chosen and established system of computing, programmes, checking for updates, and other subscriptions. Alongside the formalised subjectivity this produces, it also means the artwork is not bound by the gallery. Rather, it recreates for itself a new gallery with each iteration, one that straddles the division between public and private art. The audience, through their choice of who to follow and how to access their feed, have much more input into their ‘home gallery’ than they would when visiting the rest of Too Orangey for Crows. The composition of the object is such that each audience member can make what they will of it.

(4) It can always still be political, if that’s what people make of it, though.

(5) James Flynn makes much this point in his development of a morality without objectivity. See James R. Flynn, How to Defend Humane Ideals: Substitutes for Objectivity (Lincoln and London: University of Nebraska Press, 2000).