Things in your life that are worth throwing up 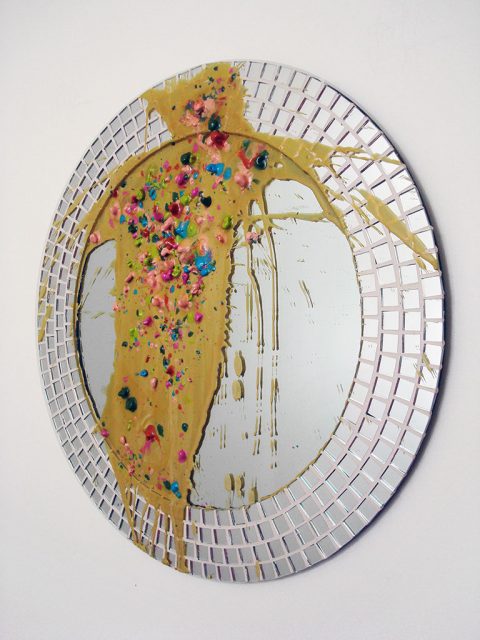 Members of the Academy, artists, friends and supporters.

This work is bothersome. It is troubling. On many levels. To anyone. It is not tasteful. It’s distasteful. It represents the body’s rejection of things. But even more so, it felt troublesome to me.

Firstly, it is troubling because I know this artist. If there was a work in this exhibition I could be accused of having a conflict of interest about it this one. I tried in vain to find something in the show I believed in more equally, or as much. There wasn’t.

I’ve seen lots of his/her’s (lets keep the mystery for now) work in the last two years, and even written on it. But ultimately I know this artist because he/she is so good as an emerging artist at getting out there into every crack or fissure of an opening to build a career as an artist. He/she is not dealer represented, though he/she has shown in dealer galleries, he/she has not been in any group shows in recognised public art galleries, and nor as far as I know is his/her work in major public collections – but he/she is everywhere in the last few years on the edges trying to get in, and yet largely unrecognised.

If this is what we call the artist-run phase of an artist’s career this artist is sprinting. I tried to reject it, I tried to remove everything else I know about the artist from my mind to see it as you here at the Academy might.

Yet even more it teased me, because it itself is a work about rejection.

My personal reasons for finding the work difficult are not the most important reason this work is troubling. Let’s face it: it’s a brat. An irritant. I may have friends who won’t speak to me for a few days because of its selection. It’s a work to hate to love to hate. It is cheap. It may even be nasty. It embodies that conflicted self-reflection we have with ourselves when we look in the mirror. We surprise ourselves by how good we think we look some days. On other days, oh how bad.

Even if you really like it, you may hate it as well. It teases you. It insults you. It looks right back at you, but – like good things do I think – if you’ll give it time it also asks you questions and keeps on doing so.

It’s like a disco ball encrusted punk grenade thrown into this room, a gob of spit. Potentially it rejects everything the rest of the show is about or stands for. It’s so anti-craft it’s an antiaircraft projectile. And yet (and like with good complex work there are lots of ‘and yets’) it also shows the mark of lots of consideration in the making. Of reworking material. It’s not craft as we know it but there’s both lots of conceptual and physically crafting to make this repugnant ‘and yet’ attractive piece.

This is an exhibition generally that could as easily have been called Regurgitation as Remake – for what is regurgitation but a reconstitution of found, digested material. In this respect it’s the exhibition’s icon.

Yet that’s not quite right of everything here because – of all human outpourings – regurgitation is a rejection by the body, not an assimilation. The body is not at ease, it is trying to digest something that it doesn’t want.

The work for me manages, in its light $2 dollar shop cheap yet well-crafted way, to speak to the conflicted nature of our presence in the world: our ego, our desire, our materialism, our narcissism.

An artist’s game of paintball with chewing gum, it ‘reflects’ on a world where we have ingested and chewed on too much bright, sugary confection. It’s the result of singing “I want Candy” too many times. Of buying too many cheap badly made materialistic things that exploit the world for too long, at the world and other peoples expense. It is a world that is sick, environmentally at the very least, and can’t do anything with that sickness other than vomit it up. It is like some final abstract expressive gesture with the mouth.

I’m reminded of two moments from the late 70s or thereabouts. Firstly the disco punk move of Sid Vicious of the Sex Pistols singing Frank Sinatra’s My Way on a glistening TV game show stage before taking to his audience with a pistol. “I can pretend to be one of you,” Sid says, but then – like some disturbed American teenager with a handgun – “I really need to just do us all in.” Secondly, British artist Richard Long comes to mind. Long is perhaps best known for making an art out of walking. He also threw mud in galleries to create these expressive slurps on the wall. When I saw some they looked to me for all the world like a cow had been let in, and left to do its business. Let’s not overlook that this winning work is dominated by the colour of diarrhea.

And yet I can imagine this artwork in your hallway – next to your McCahons, Woollastons, coats and hats. Like a zen Max Gimblett tondo (which it could almost be a Western materialist reaction against) its expressive stroke agitates pleasingly next to its circular form.

Next to your hat stand, you might check your hair in it and whilst doing so – like some vanitas work (here I recall the famed round mirror at the back of Jan Van Eyck’s Marriage of Arnolfini) – you think about life and how it is a cycle of ingesting and living with things. And then, just maybe, today of all days you might go out of your door and about your business but there may be some things you might consider rejecting. Things in your life that are worth throwing up.

The work you may well have gathered by now is Mirror #6 by James R Ford.

Originally published: on the occasion of announcing the winner of the inaugural Tui McLauchlan Emerging Artists Award 2013