Driving me up the wall 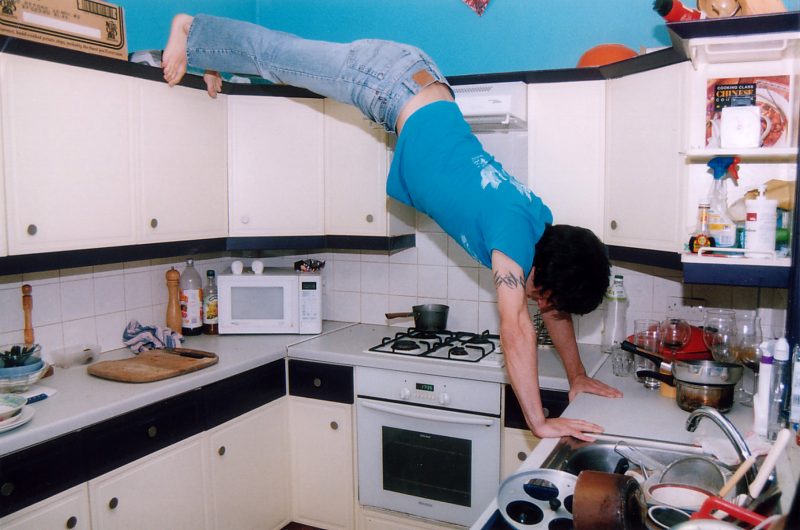 Welcome to the new practitioners of a form that perfectly adheres to the old adage; a house is not a home. Born out of all great English traditions, House Gymnastics was devised by individuals who were out of work and determined to avoid the second viewing of Neighbour’s that day.

James Robert Ford and Spencer Harrison, recent graduates from Nottingham Trent University, on the verge of tedium took exception at the sterility of their shared house and decided to use it best fit; emulating the dexterity of human flies. Beginning with the nailing of a hard tack whilst leaning on a window sill, inspiration has developed moves such as the Spiderman, Parabolic Curve and for those less assured: the Brace.

A combination of athleticism, gymnastics and the absurdity of Sunday afternoons, James is insistent though that in terms of appreciation one is to study the supple actions of others as great achievement and not just dangling off a balcony, giving room to looks of wide-eyed wonder, disbelief and a temptation to spill Vimto in amazement.

However this is no minor pastime in preference to petting Zoos and National Trust Houses. House Gymnastics is of growing international interest. The antics of the terminally skint have attracted devotees and enthusiastic advocates as formal group members from Australia and Dallas, Texas.

“Steve Ray came up with this move,”; speaks James of the American Chapter of this urban yoga, “called the Human Flag. It’s basically, he’s got this pole and somehow he manages to prop himself up using a table and stretch out parallel to the floor and his muscles are tearing out of his arms.”

With the launch of the group’s website – with move of the month and step-by-step move guides – the force-field pull of literally climbing the walls has meant that James and Spencer have had to, in incorporating new moves from fellow travellers, create The 25th Element. This assault course come mental warzone, where participants have to perform all twenty-five moves in the high-canon of House Gym in twenty-five minutes, can be seen as a challenge with records being set for the quickest time, though in hearts it is an endurance test comparable to Thermopylae. Hail the new Spartans.