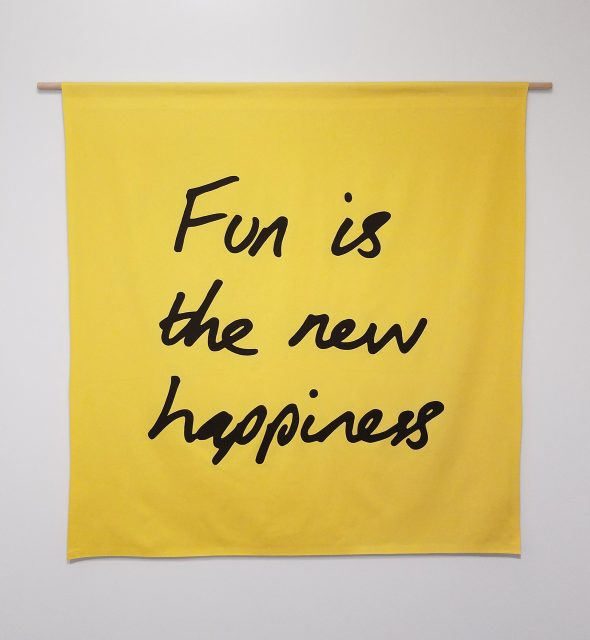 Let’s start with a question that I think could be one of your artworks. What’s the point?

That is a great first question, the ultimate question! It’s something I’ve been pondering for a long time, both in terms of art and life. Not necessarily in a nihilistic way, but more considering why we do what we do, what we value, how we attribute meaning.

And why do you do what you do?

I’ve always had a drive to make art, to draw, to paint, to create. I could have a guess where it comes from (childhood experiences, etc.) but all I know for sure is that it is a relentless thing that I can’t ignore. The “why” has changed over the years — to be popular, to be revered, to shock, to make money — but I’m simply communicating what I think is important or interesting or enlightening about being human, in my own way. How we interpret life around us, what we strive for and why.

I had a conversation with someone at the opening of an exhibition of my Painted Arrangements in 2017. He queried the value of the works due to minimal marks and “lack of effort”. I questioned him as to why he considered effort to be such a high benchmark of good or valuable art. I think it came down to what he had been taught and exposed to artistically. When you realise that your perception of life is actually born from the sum of your experiences and choices, and not some singular perspective-truth, you can start to see things differently, maybe more openly. Well, I did anyway.

So, for you, making art is a lot about engaging with ideas?

As a conceptual artist I’m always putting ideas at the forefront of my making process. There’s a famous Sol LeWitt quote that has stuck with me since my uni days: “The idea becomes the machine that makes the art.” My work, especially over the last five years, has been heavily influenced by writing and ideas around the human condition and “the Absurd”. As Kierkegaard argued, in the end, we must all make decisions which are not based upon fixed, rational standards — choices which are just as likely to be wrong as right. This notion was the starting point for my Potential Drawings, Painted Arrangements and Dots. Art can often manifest as some visual or conceptual points of reference for the viewer to interpret in a predefined way; we metaphorically ask them to join the dots but they will inevitably join them, or not, in their own way. By searching for, finding or dismissing ideas in these works, the viewer is complicit in their function as an allusion to that part of the human condition that hungers for meaning.

What does it mean to be happy? Can you have happiness without sadness? Ideas of choices, needs and wants, and how we use our time have been present in my work for almost a decade, but this is the first time my practice has delved into the joys and woes of the pursuit of happiness. As part of this I’m interested in the concept of hedonic adaptation — the tendency of humans to quickly return to a set level of happiness despite life’s ups and downs. No matter what you buy, or what you achieve, you’re only likely to feel happier for a short time. Also, having fun is often confused with being happy. People see “having fun” as a way to be happy, but fun is only momentary and you’ll always be hankering for the next instalment of fun (happiness).

These realisations have informed how I view my own happiness and having children has also had a huge impact. Things have shifted in terms of priorities and perspective; my happiness, and that of my children, are often interconnected. As a parent you are wanting to set up activities for your kids that excite them, keep them occupied, make them happy. I once spent a long time setting up what I thought would be a great painting activity for my three girls. All the materials were laid out, ideas prepared, etc. but when they sat down they went straight to arguing with each other, not interested, not engaged. This made me unhappy, more than it should have done. But that was because my expectations weren’t met. This made me consider if perhaps my level of happiness is determined by my expectations versus what actually happens. That was the inspiration behind the text work Reality Divided by Expectations (2018).

I like the Potential Drawings series a lot — they shift my level of happiness up a notch, for a moment at least. It’s quite a different effect to the text works which, perhaps because I’m a writer, have a more leveling effect.

Part of the joy created by the Potential Drawings, if they engage you in this way, is that you get to use your imagination. As kids we used our imaginations all the time — remember the fun you used to have! As adults, especially in the age of digital connectivity, we are constantly exposed to information and advertising — everything trying to grab our attention. We want to consume quickly and so we’re used to things handed to us on a plate: easy to digest and move on to the next thing — that was actually the inspiration for my neon work Something or Something Else (2015). But using your imagination takes time, and perhaps effort if you’re not used to flexing that part of your brain. There’s a great quote by Henry David Thoreau: “It’s not what you look at that matters, it’s what you see.” All conceptual art requires some modicum of imagination as the viewer has to use abstract thought to perceive more than what is in front of them.

Same goes for my textworks that use only a few words to say much more than is presented. My more recent text works deal directly with happiness and the ups and downs of daily life. The text in the work Happy Happy Joy Joy (2019) is taken from the name of a famous song from the 90s animated series, Ren and Stimpy. “Happy happy joy joy” is defined as when the world expects you to put on a happy and joyful face, but what you really want to do is shriek at the top of your lungs and rip your hair out in anger/frustration/misery. Keep telling yourself you’re happy, don’t admit you can’t cope, show everyone your best bits on social media… The pressure of gaining followers and keeping up appearances means that no one wants to admit they aren’t happy or have their off-days, but we all do, some more than others. The text is presented in a sombre way, not joyful or excited at all – there’s humour in this work, albeit humour with a dark and sarcastic in tone.

There’s a sense of humour running through most of your works. You consider things seriously too, but I get a sense you’re mocking the seriousness in Art, in yourself, in the world. Why?

The irony of wanting my lack of seriousness to be taken seriously is not lost on me. As I mentioned earlier, I’m a believer in nurture over nature, that we are a product of our choices and experiences (I made a textwork in 2016 entitled Sum of Choices). I grew up in England, which has one of the most sarcastic and self-deprecating populations in the world. And with such a dry sense of humour. I’ve always found humour is a good way to draw a viewer into a work — it breaks down the barrier that contemporary art can sometimes put up around itself.

Absurd things can be funny purely because they are so ridiculous. I made a short, looping film in 2015 entitled The Enigma of Being, which symbolically portrays our search for meaning. Being and existence are major topics in metaphysical thought, as is the meaning of life which is elusive to many, though religious believers claim to have found it. The film focuses on the futile behaviour of a fly that has strayed inside, repeatedly banging into a window pane. However, only a few centimetres away is an open window. The buzzing and bumping continues in a strangely mesmerising way, but the film ends before any resolution – did the fly escape or was it destined to follow the same behaviour until its demise? (Many a dead fly can be found directly under a window).

Are we flies banging on the window with our pursuit of art? Or is that pursuit a way to escape?

I read something the other day that said instead of being disheartened in not finding what we believe to be happiness, we should be appreciating the happiness gained in the pursuit. To take happiness in the banging of ourselves on the window while we make our way, sometimes blindly, through life.

In Albert Camus’ essay The Myth of Sisyphus, the final chapter compares the absurdity of human life with the situation of Sisyphus, a figure from Greek mythology who was condemned to repeat forever the same meaningless task of pushing a boulder up a mountain, only to see it roll down again. According to Camus, the person who can truly know that life is absurd and get through it with a smile is an absurd hero. “We must imagine Sisyphus happy,” he tells us, for the absurd hero is able to carry out a life as meaningless as eternally rolling a boulder up a hill and find enjoyment in it anyway. My work, An Absurd Hero (2018), absurdly illustrates the points discussed above. It is a short looped film consisting of a “Grinning Face With Sweat” emoji cushion being put through endless cycles in a tumble dryer.

That’s an excellent example of humour breaking down barriers, as you mentioned before. The notion of contemporary conceptual art as unapproachable and esoteric is a common one. What’s your take on that?

The conceptual nature of art can be a barrier, and one which I struggle with. I want to create works that require some imagination or investigation, but the issue with those works is they can make the viewer think that if they don’t “get it”, they are intellectually inferior. I try to make work that can function on different levels. For example, An Absurd Hero was created for the reasons I stated, but at the same time, if someone sees the work and has a chuckle at how absurd it is, that’s a win. It’s supposed to be absurd. Life can be absurd and confusing.

What do you think your next five-year retrospective catalogue will be about?

The first one was about failing better, and this one is about evaluating things, so maybe there’s a theme of self awareness/self improvement/enlightenment that is surfacing. I have no idea what the next five years will bring, but I’m sure I’ll be making a bunch of works that are happily absurd in nature.

Anna Knox is a writer interested in art and its intersections. She has an MA in Creative Writing from the University of East Anglia. She writes fiction, essays and criticism and contributes regularly to The Spinoff. annaknox.com/@ajdknox