How About Some Art That’s Serious? 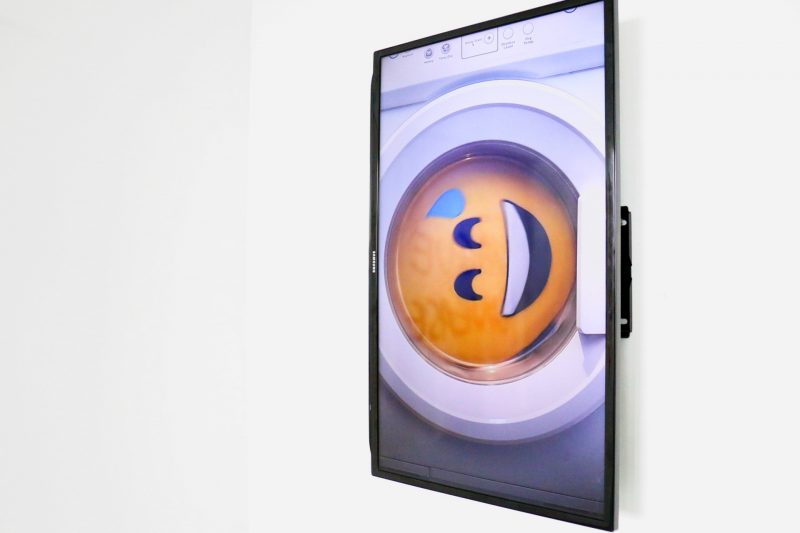 There seems to be a dearth of art in this country that deals with the deeper layers of existential issues. Questions about the human condition would appear to be currently off the menu.

Is this because Colin McCahon half a century ago mined this vein to exhaustion? Was he the first and last hurrah of works that would confront and explore the perennial human questions, before being quickly replaced by an obsession with trending politics and linguistic fiddle?

If one looks hard enough there are one or two out there ploughing a lonely furrow who still think art can and should address issues that deal with doubt, desire, fear and the fundamentals of human experience.

One of those is neo-conceptual artist, James R Ford. A small selection of his works are currently on display at Never Project Space, in Hamilton.

Post Covid (or should that be, the ongoing pandemic?) has thrown some of these works into sharper relief. Beginning with flag-like banner pieces (appliquéd canvas on wooden dowel), we are presented first with Vague Unease, a plain white/cream ground across which a bold text in black reads “vague unease”. Created in 2019, the phrase now takes on an added level of disquiet and anxiety.

The singular short phrase recalls the practice of Jenny Holzer and Barbara Kruger, but the more minimalist aesthetic means that nothing distracts from the power and presence of the words. Nor is it political in its intent like so much text-based stuff today. It speaks directly to the heart of the matter without being polemical or preachy.

This is not the imprint of the Holy Face, the Volto Santo, though there is enough in the presentation and form, together with its chunky black lettering, perhaps to suggest something of the cloth that Veronica used to wipe the face of Jesus with, but without any religious or doctrinaire overtones. This is a completely secular rag imprinted with the modern conundrums of our own impending individual ‘crucifixions’.

Our contemporary world, denuded of spiritual belief and living as we do in a climate of apocalyptic scenarios of various kinds, leaves all of us with a vague sense of disquiet and apprehension. Ford has captured that simply with the simplest of means.

Everybody’s Looking for Something is the second banner work in the gallery. The text is a line taken from the song, Sweet Dreams, by the British new wave band, Eurythmics. The lyrics reflects Annie Lennox’s despair at the time of writing after the breakup of their former band, The Tourists, had taken place.

Ford uses this slightly nihilistic impelled phrase and places it, somewhat ironically, against a cheery background of pink and yellow zig-zag decorative patterns. This duality may reflect the fact that Dave Stewart thought the lyrics too depressing and added the more uplifting line, “hold your head up, moving on”, that was used as repetitive chorus to offset the darker lines about being used and abused.

Such a contest perfectly mirrors the dichotomy in a world where sweet dreams often turn out to be a chimera, and the artist has played with that contradiction in his format where the jaunty zig zags could paradoxically resemble a sea—”the sevens seas”, mentioned in the song that people travel manically across, looking for that “something” eluding their grasp.

‘Manic’ might best express the video work, An Absurd Hero, which consists of a short looped film presenting a grinning emoji cushion being put through repetitive cycles of a tumble dryer. Here Albert Camus‘ take on the ultimate irrationality and absurdity of life is evoked. Can we, like Sisyphus, keep smiling as we are condemned to repeat the same tasks each day in the wider context of the ultimate meaninglessness of it all? The answer we get from the work would appear to be yes, but no. It’s a hollow victory at best.

The remaining works in the show are a series of dot creations placed randomly on stretched canvas. Here Ford is leaving it completely open to the viewer to interpret what he/she sees, while placing the dots in such a way as to defy pattern or connotation. Are they stars in a galaxy, do we join the dots, is that a camel or a weasel? It is the ultimate abstract Rorschach test, destined to tease and frustrate all attempts to discover intended meaning.

Woke Up Like This is a small representative sample of Ford’s oeuvre and a timely reminder that the role of art can still address, with a certain panache, age old concerns that reach beyond the confines of the political.