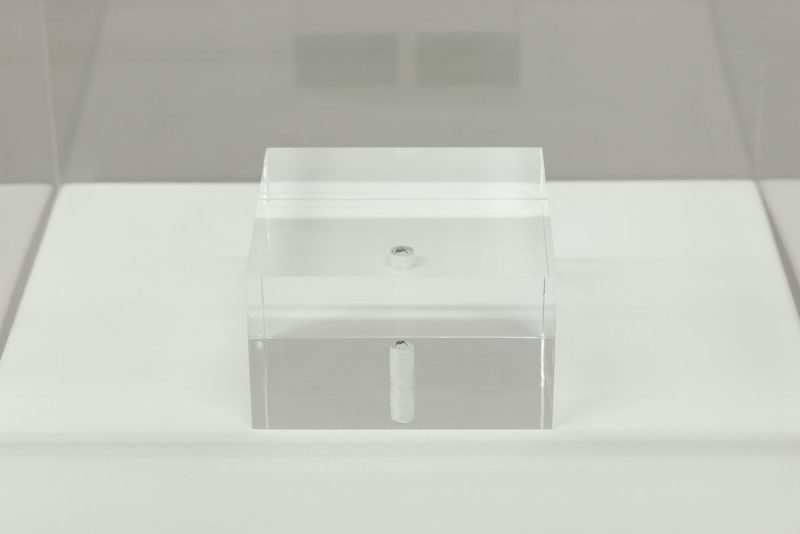 “The Emperor’s New Clothes”, a short fable by Hans Christian Andersen, is about a King who is fooled into wearing invisible clothes. Traditionally it is the King who is made to look a fool after a young boy, naïve enough to speak his mind, points out the truth that the King is naked. The tale describes two weavers who promise the most exquisite cloth ever seen, but invisible to all of those who are unfit for their position. The cloth is promised to a sartorially obsessed emperor and immediately commissioned. This intangible great thing is likened by James R Ford to the intangible quality that separates good art from the bad, or at least art from not-art.

As the reputation of the cloth spreads and production begins, no one can see it or will admit to not seeing it for risk of revealing they were unfit for their position. The production continues and the weavers are furnished with every resource required.

When the Emperor parades before his subjects in his new clothes, a child cries out, “But he isn’t wearing anything at all!” Whispers build up and the audience declares it too. Even the King decides they must be right, but bears up and continues with his procession.

The moral of the fable is perhaps less clear than commonly assumed. If we are to suspend our own disbelief for a moment and trust that the weavers are mystics capable of a task we are all unfit to see; What else are the weavers to do but practice their craft and sell their wares to an audience that knows they should appreciate it but don’t know why. Perhaps they aren’t swindlers at all but merely hard working artisans of a craft beyond our grasp, possessing a knowledge as yet unattained by their audience.

The King, on first appearances the butt of the joke, only reflects the ignorance of his audience back at them, but perhaps we should be slower to laugh for the King pursues beauty for its own sake and it is this that is put on display. The child may be wrong, or right, but it is the pursuit of something greater that will lead us forward, and revealing our ignorance is a part of that. It is when he is standing naked before his subjects that he becomes his most noble.

In curating this exhibition Ford has made a dual claim, either asserting that the belief in the artwork is as unfounded as that of the magical cloth, or that there is really something there. Although this is perhaps up to the audience to decide, it is safe to assume that it is the latter for in confronting the elephant in the room, or as Ford may prefer it, Schrodinger’s Cat in The Hat, addressing the subject brings about the conclusion. The question implied in the premise presumes that there is something there.

But it is equally the questioning that allows the debate to exist at all. If we abandon Schrodinger’s cat in the box, then for all purposes it is dead. Opening the box is the only thing that gives the cat a chance of life at all.

To explore this conclusion further is to question the role of this text, required to back up the implication of substance in the work, but superfluous if that is truly the case. An accurate insight into any work diminishes its potency, while an inaccurate one betrays it. As suggested by Boris Groys, we must dress up artworks in text before we present them to the public, lest they be seen naked.

By shifting the focus of the tale from the object of the cloth, to that of the constructed story told by the tailors, an alternative reading is reached.

During the time between the commissioning of the clothing, and the child calling out, everyone in the town becomes enchanted by the cloth. The fabrication weaved by the tailors creates a fertile period of speculation and imagination where the townspeople at least for a moment must imagine what is being said, whether they believe it or not. The fear of being revealed as one who can’t see it, encourages each to speculate about what it is that isn’t there.  In that time the truly beautiful cloth exists for all who care to imagine it.

For the plot to function, it is vital that no one questions the assertion of the tailors. It is the story that the tailors tell that facilitates the plot of the fable by allowing the engagement with something that is or isn’t there. What Ford presents is not the brilliant fabric of the tailors, but the space for a conversation about what that could be.

James and Eleanor Avery’s practice uses iconography and pop culture to restage, reinterpret and re-contextualise the familiar to facilitate a new reading. The initially obscure and disparate allows for a synthesis of meanings. Matt Arbuckle avoids the familiar altogether, denying the viewer an obvious entry point into the work, instead the viewer attempts to reconstruct an image from the suggestions hidden within gestures, opening up a discourse as much involved with the construction of the painting as with how it is perceived.

Slips in logic, humorous at first, provide an entry point to confront the reality that supports them. Ford’s subject of nothing leads one down a path of enquiry beyond what nothing is, to what labour and value means, while Sanjay Theodore reveals the collision of two worlds in a series of bureaucratic memos.

Glen Hayward takes objects of little value as a subject to shift where the subjective value of the artwork is placed. By recreating mundane objects, such as light switches or cardboard boxes, in carved wood the viewer must reassert how their value is allocated, valuing Hayward’s craftsmanship while also being forced to acknowledge and reconsider the mundane object itself through its simulacra. In a sense Hayward veils the objects he creates in an invisible cloth, masking them from the inattentive viewer, but undressing to those who pay close attention the objects for what they really are.

While a grasp over the intangible essence that makes good art good remains unattainable; much like the invisible cloth, good art provides a channel to other realities that provides an opportunity to be more than just an onlooker. The cloth, as good as it may be, pales in comparison to the world that is opened up in looking for it.