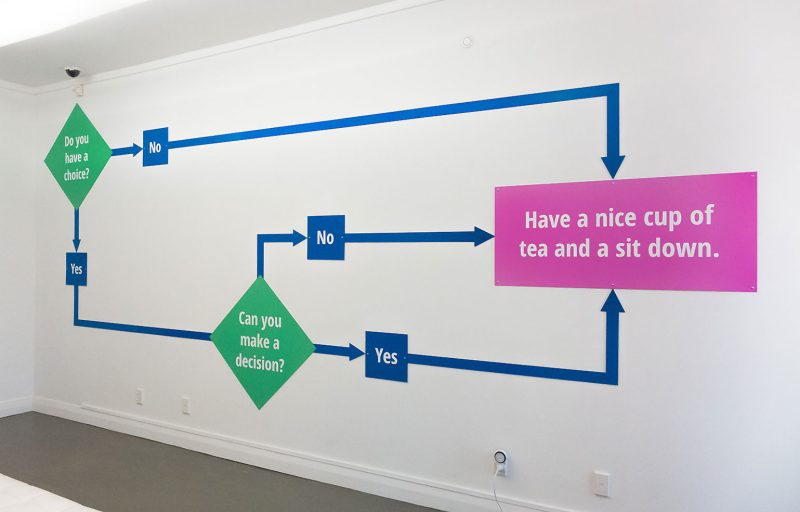 Redbush and Milk comprises of recent text-based works that consider themes of choice and fulfilment. The glue to the installation is tea, or more specifically Redbush and milk (Ford’s tea of choice), and the idea of the act of tea drinking being used for both relaxation and discussion/contemplation.

In the Needs and Wants series, ink or paint is used to fill found magazine pages except for one or two words or a partial image, some of which could sit within the tiers of Maslow’s hierarchy. With works such as Filled Except for Love, Filled Except for a Bikini Body and Filled Except for an iPad Mini, Ford sets up a parallelism for what we feel we need, want or are missing in our lives, be it emotional, intangible or materialistic. Ironically turning headlines, adverts and paparazzi snaps from gossip magazines (which in themselves often try to sell us a “better” or “perfect” lifestyle) into conduits to think about desire and fulfilment.

Have you ever had a tricky situation or decision that needed some thought? In British TV soap operas in particular, whenever there is a crisis a character always suggests that they “have a nice cup of tea and a sit down”. At the centre of the exhibition, Ford’s large-scale flowchart All choice leads to a nice cup of tea and a sit down ironically demonstrates that tea can be the answer to every situation. Albert Camus once said about the importance of decision making: “Life is a sum of all your choices” and the drinking of tea in this context can be a simple metaphor for taking time out to consider things.