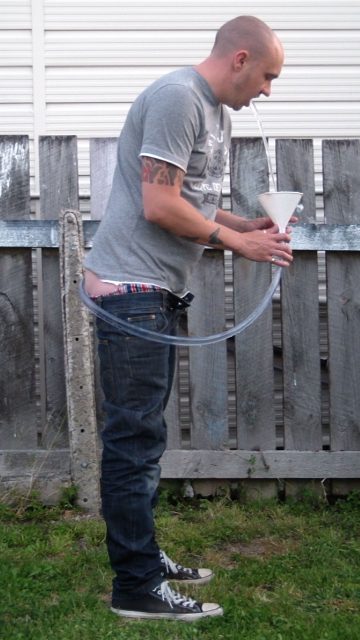 Loopy is a selection of films and animations by James R Ford that feature loopy ideas that loop and/or may drive viewers loopy. The exhibition focuses on absurdity, probability and infinity, relating to life and how we spend time in the everyday or in the art-making process. A number of Ford’s films result from a period of exploration into boredom, and the paradox of doing something to relieve boredom that in turn becomes boring. The most recent works use twisted scenarios to illustrate scientific/theoretical ideas and paradoxes.

Ford’s latest video work, Waterfall (2013), is displayed on a screen in portrait orientation. In the short film Ford sways subtly in his role as a perpetual-human-waterfall-cycle inspired by M.C. Escher’s famous drawing of the same name. The way the water flows out from the artist’s mouth, into a funnel, through tubing and back up into his anus is obviously illusionary, but also mesmerizing.

Snake Pi (version 3i) (2011) is an animated film lasting exactly 3.14 hours. A simple snake appears on screen and slowly slithers and twists up and around itself until it fully fills the shape of pi, before pulling its body along the path it has made, and disappearing from the bottom of the picture. The work purposely references the monochrome display of mobile phones from the late 1990s, on which a classic snake game was a standard feature.

Hit Me With Your Best Shot (2008) features no music – only the pathetic clicks and twangs produced by the plastic guitar controller can be heard as Ford plays his way through all 39 solo career songs in the Guitar Hero III game. Having the camera mounted on the head of the ‘guitar’ in the fashion of a rock star, alongside the non-eventful audio, highlights the realisation that you aren’t actually creating anything tuneful in reality. Turning the game into a non-stop durational challenge also transforms a boredom-reliever into a tiresome task, as well as a boredom-inducer for the viewer.