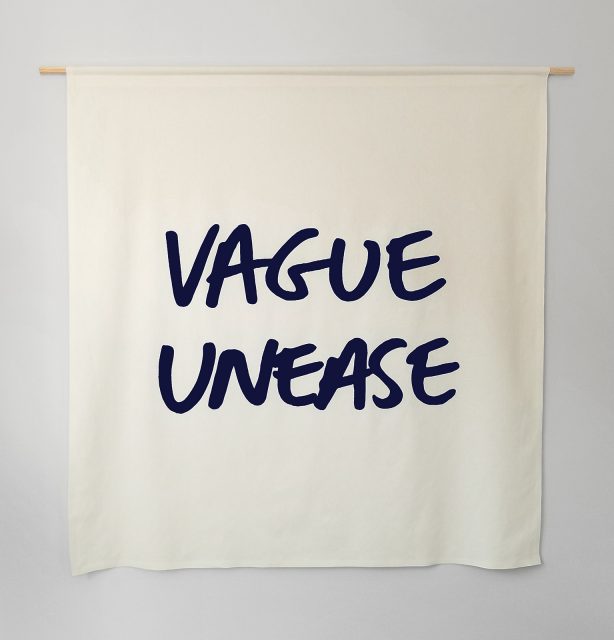 Woke Up Like This is a solo exhibition of work by James R Ford, exploring ideas around perception, absurdity and happiness. The works take the form of paintings, text statements and video.

Ford’s textworks are in the form of appliquéd cotton or linen, flag-like banners. The works consider the pursuit of happiness, search for meaning, and the general stress and confusion of it all. As an example, Vague Unease speaks of unease when things seem to be going too well and you think something bad must be round the corner, to the unease you might feel when viewing art and don’t know what to think.

The dot paintings have no obvious answer or interpretation. Is there one? Regardless, it’s human instinct to search for patterns, recognisable shapes, and formal figures within the abstraction; to impose a rational explanation. The dot works play on the philosophical notion of the ‘Absurd’, which describes the mismatch between the human impulse to find or make meaning and the futility of this endeavour. The dots in these new works are larger (relatively) than before, and there is the use of colour as a further stimulus to stir the imagination (which, in modern times, we often undervalue and underuse).

According to Albert Camus, the person who can truly know that life is absurd and get through it with a smile is an Absurd Hero. “We must imagine Sisyphus happy,” he tells us, for the absurd hero is able to carry out a life as meaningless as eternally rolling a boulder up a hill and find enjoyment in it anyway. An Absurd Hero absurdly illustrates this, consisting of a “Grinning Face With Sweat” emoji cushion being put through endless cycles in a tumble dryer.