The Thing Plus Your Mind 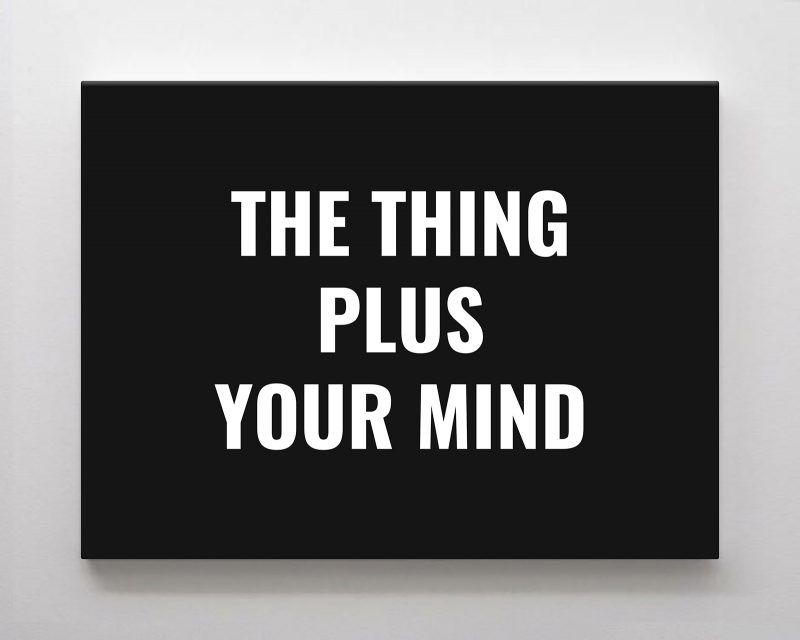 The printed word has been weapon since first painted, first ink blocked. Stamped, it is potent symbol. And in this new digital era, words are massaged with architectural precision for economic and political gain.

The ability for all to erect billboards online hasn’t led to a stronger participatory democratic structure, as many had hoped. Instead the powerful gather “followers” who retweet buffoonery as much as they do profundity, outrage helping spread the message. Trojan horses everywhere.
The sincerity of language has been eroded, hierarchies of meaning, grammar and punctuation are coerced to make truth slippery. A simple phrase can be a bomb loaded with nails. The arrangement of words becomes hyper-formulated, their effect algorithmed.

So let’s bring back the fun. Because as James R Ford’s practice extolls, it’s in play that we learn. Independent of the corporations who preach, there is meaning to be realised through self-creation.

As I write the CEO of Twitter Jack Dorsey is expressing concerns about political messaging needing to be earned rather than bought. And as a conceptual visual artist selling work in a marketplace, ‘being bought’ is a central concern for Ford in more ways than one. It’s part and parcel of his professional worth as an artist, and it’s the thematic thread that runs through these textworks: the balancing of our ‘want’, with what we are troubled to consider of value. These works are self-aware of their status as purchases; their place amongst your furnishings. Recent text works tease the art buyer about the lack of profundity wrapped up in their dilemmas: Angst of Acquiring (2019) and Fear of Losing (2019). They highlight a culture that has become dangerously competitively obsessed with property ownership.

Ford’s series of textworks in this digital era provide a meditation on the meaning that might be best embedded in physical objects subject to purchase. Taking Andy Warhol’s pop art as some kind of contemporary foundation – melding the worlds of product advertising and art to re-present media images – these textworks are acutely, absurdly aware of the tensions of art as marketing.

Like waving a white handkerchief, in one work the words ‘vague unease’ gently flap, wafting the sweet perfume of want while suggesting the spread person to person of a disease. How do you really feel about all this stuff? Who made it, and under what conditions was it made? Vague unease pervades our use of the internet and our reading online. Cynically, you may say Ford makes the owner of his works feel better about their guilt – that they’re ‘woke to it’ – while at the same time buying into it. With absurdist play Ford takes the basic formulations of words and materials and give us new mathematics.

Beyond Warhol let’s also consider the conceptual artists who since the ‘60s have focussed on language. I’m thinking in particular of the Marcel Duchamp-fuelled pioneers Joseph Kosuth and Lawrence Weiner. Kosuth is known for text works which assert the notion that art is “not a question of forms and colours but one of the production of meaning.” Ford brings all three of those things – form, colour and meaning – back together, in a spare post-Kosuth form.

And when it comes to being aware of the capitalist catch to conceptual work I think of Weiner, who was strong on asserting that the art was not about the object, just embedded in it. Weiner’s artist book Statements from 1969 includes the following: “The object – by virtue of being a unique commodity – becomes something that might make it impossible for people to see the art for the forest.” And, “People, buying my stuff, can take it wherever they go and can rebuild it if they choose. If they keep it in their heads, that’s fine too. They don’t have to buy it to have it – they can have it just by knowing it. Anyone making a reproduction of my art is making art just as valid as art as if I had made it.” That’s all very well, but 50 years on we’re still stuck with the object; with what Ford in a work about the conceptual nature of art calls ‘the thing plus your mind’.

Ford’s text paintings are beautifully, individually made, but they’d be easy to replicate. You’d struggle to identify the signature. Like Weiner he’s making sculpture as a concept where colour and form can be changed. They avoid one signature style, one kind of branding. A cotton tote bag Ford made from 2017 carries the slogan ‘condemned to meaning’; Ford is working hard (or should I playing hard) to avoid that condemnation while still leaving the door open to its viewers finding wisdom. That tote bag tells us there’s nothing good about words getting locked into one interpretation.

Ford’s strategy is to liberate phrases. I’m reminded of the unknown artist who in 2003 liberated the phrase ‘Mission Accomplished’ by placing it on a banner tied up to the railings outside London’s Serpentine Gallery. They were aping and successfully airing out George W Bush’s unfortunate use of the phrase on a giant banner on an aircraft carrier a mere six weeks after the American invasion of Iraq.

Unlike some language-based conceptual artists these text works offer neither instructions or affirmations. They open up to your interpretation, your answers. They require participation. There’s none of the polemics of Jenny Holzer where phrases are like virus shields (“Religion causes as many problems as it solves” or “Protect me from what I want”). Nor the conceptual comfort of Martin Creed’s giant neon text work for the facade of the Christchurch Art Gallery ‘Everything’s going to be alright’

Yet like Creed there’s cynicism in Ford’s work. Imagine ‘Happy Happy Joy Joy’ spoken drolly with a roll of the eyes. Yet Ford’s work also tells us that he believes real happiness, real joy is everything, It just can’t be bought, but through art it can be meditated on. When Ford writes ‘Fun is the new happiness’ on a yellow cotton flag, it’s like he’s translating the ubiquitous smiley face into text, pointing to the emptiness of fun without play. As Madness sang “Welcome to the house of fun, Welcome to the lion’s den, temptations on his way.” Ford directs us to think about how we’re being duped, and how then to reclaim our own house of fun.

Language crept into the picture frame with the cubists Braque and Picasso, and we can look here to Colin McCahon for taking the word of the street and seeking wisdom. But rather than preaching or collaging Ford follows his interest in the puzzle. He has often utilised the visual language of the children’s toy to express the balancing acts involved in the complexity of finding meaning.

A series of text works that present phrases as word equations sit well for example with 2014 work This That, In this work a small bright children’s see-saw was balanced by the placing of a half-filled glass of water at each end. Half full or half empty, Ford asks, playing the stage magician demonstrating a trick. Similar to his text works this work could be read several ways, and there was also a conceptual component embedded in the title. See-saw Ford says is a phonetic translation of the French ‘ci-ça’, which literally translates as “this-that”.

There’s a big nod to Duchamp there, and these text works take Ford’s play with language to the next conceptual level. I like how the equation works open out meaning in bald assertions rather than shut them down. They are powerful visual images.

What happens when reality is divided by expectations? I picture someone trying to gather the shards of a life back together after expectations have been blown out as unreasonable. What danger is there in a belief strengthened by the active subtraction of doubt? Uncertainty Multiplied by Powerlessness (2018) expresses for me the deep danger of the holding pattern we put refugees and other displaced people in. It’s a formula we’re all subject to, creating that ’vague unease’. These are powerful art algorithms.

Which brings me to fonts. The font for Vague Unease (2019) appropriately looks close to the handwriting-style typeface called ‘Caveat’. Yet handwritten is a crock: as an indicator of personality, of the hand, it has long been drained of the individuality, catalogued and commodified. I can make it up on my computer. Happy Happy Joy Joy (2019) meanwhile resembles a contemporary serif called Lora which befonts.com tells me “perfectly conveys the mood of a modern-day story, or an art essay.” How fitting.

As another recent Ford work here states, quoting The Eurythmics Sweet Dreams, “Everybody’s looking for something”. Looking for something to buy, to decorate walls and create interest but also to offer some kind of wisdom, an intrinsic kind of value. Ford provides both – the mystic is brought down to earth.

The work Everybody’s Looking For Something (2019) is on appliquéd fabric: handwritten font on a pink and yellow zig zag pattern that bears the marks of handprinting. We remain in thrall to the idea of the handmade. We are fooled by its pretence of value. We see human marks and divine from that some more authentic expression. But can the idea of itself be just as strong?
I imagine a work like this suited to a boutique clothes store, floating on the walls in between the racks. As you finger the fabrics – given a ‘curated’ set of choice + choice + choice + choice – the art makes a counteroffer, challenging your decision on what is of value.

Art here doesn’t provide the answers in the way a pair of trousers can. It doesn’t preach, or even question. But it does create a window within the world for you to stare out of and get some perspective on things.